Kathmandu, May 20. Deputy Prime Minister, Ishwor Pokharel, has said that a policy should be adopted to provide subsidy to farmers giving importance to commercial agriculture to stop land plotting and to increase domestic products. At a programme organised at Kakani rural municipality-4 of Nuwakot today, the third day of Post Bahadur Bogati Memorial Agriculture Fair, Deputy Prime Minister Pokharel said that no situation of buying millet and keeping land barren should be developed. He said, “The doors are opened for all to take responsibility of running the state by winning confidence of the people on the basis of own ideology. No one will be punished on the basis of ideology. So all political parties, civil society and general people should involve in the sector of economic prosperity, tourism development and production.”
Saying there was no meaning of adopting revolutionary ideology if people are not happy, DPM Pokharel said, “All should involve in the campaign of making country rich and people happy. We want to move ahead together with Nepali Congress for development construction. The country has now wanted this. ” Evils and aberrations would be stamped out by amending Public Procurement Act to end plight of Pasang Lhamu highway, he added. Chairperson of Bogati Memorial Foundation, Hitraj Pandey said that agricultural productions of 12 local levels of the districts and modern agricultural equipments have been put on display in the fair. Kathmandu, June 12 : As the entire world is gripped by the pandemic of COVID-19, 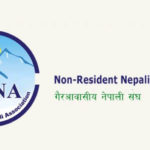 Kathmandu, June 5 : The Non-Resident Nepalis Association (NRNA) has prepared the preliminary list of Preparation on to declare the state of ‘public health emergency’ Kathmandu, June 4 : The Ministry of Health and Population is preparing to declare the